Rufus Wright – Man of The Month 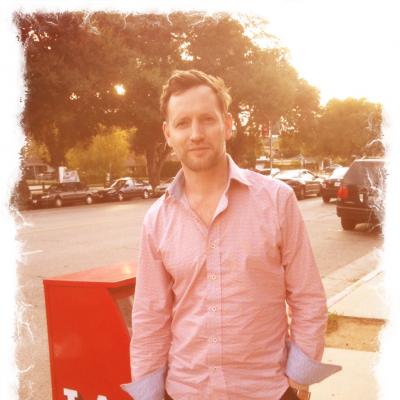 Rufus you have just finished what must of seemed like a marathon run in the 39 steps how are you feeling?

Shattered- about a stone lighter and a good deal fitter. Terribly sad too- I hope it isn’t too actor-ish to say that you begin to live with a character when you play him for that long (around 300 performances in my case) and if you have to grow a moustache or have a certain haircut for the part you live with him 24/7. So it can be a bit emotional when you play him for the last time.

Your character got to wear some very beautiful tailoring is this something you are going on with?

The one indulgence I promised myself on the show was to have a suit made for me by the show’s tailor, the brilliant Keith Watson. He made me a 1940’s wide lapelled double breasted grey flannel suit: 6 button, ticket pocket, fishtail back- just gorgeous. I’m hoping the producers will let me buy the Hannay suit for a slight discount (a 3 piece tweed) and then I’ll finally have decent town and country suits and will be on the way to being a proper Chap.

So it’s a tough life on stage every night in the west end where do you go a for a quite escape drink?

My club is Black’s on Dean St- it’s less well known than The Groucho, Century etc but a lot nicer. Tatty carpets, huge sofas, huge open fires and a good wine list. No cocktails, no music- kind of perfect.

When did you decide that the acting life was for you?

I decided when I was about 13 that it might be worth a go. It’s a dangerous thing, being in a school play. Having the attention and a certain level of control over a room full of your peers and adults can get you drunk on power. That wish to hold an audience in the palm of your hand doesn’t really leave you.

How do you Chill out?

I paint and do lettering- rufuswright.com has some examples if anybody is interested… But since having our first child in December of last year I’ve had no time to myself at all- it’s extraordinary how much time they take up.

I do a pretty good seafood ramen

Probably Japanese food again- although traditional British food cooked well is a real favorite. And after having the baby I succumbed and put the local Chinese on speed dial.

Ever get stage fright?

Not really. I get nervous at the start and end of a run. And the one time I completely forgot my lines it was actually rather like people who describe nearly drowning- peaceful, almost Zen like, a sense of being outside of oneself- instead of like a violent jolting train crash, which I imagined it would be like.

My favourite American actors are William H Macy, Martin Sheen, Philip Seymour Hoffman and Julianne Moore. And over here, Paddy Considine- who it turns out is even better as a director. I’m lucky enough to have worked with Michael Sheen and Rory Kinnear, who are two of my favourite British contemporaries. I love Carey Mulligan’s films. And I think Matt Smith’s Dr Who is just great.

I always think new writing is the most exciting thing to work with, and so my dream role is probably unwritten, or on someone’s hard drive somewhere.

Is romance dead to the modern man?

No. It’s always been about imagination, and that’ll never die off.

New Playwright to watch out for?

DC Moore. He wrote a play I was in at The Royal Court called The Empire, about soldiers in Helmand, that was terrific and a great thrill to work on. His name’s Dave really, but the DC is a nod to the comics and to make him sound mysterious. It worked until I told you his name was Dave, didn’t it?

Don’t be afraid to wear a tie socially. Embrace woollen heavy textured trousers with a smooth well cut shirt- HA, naturally. I’m a fan of vintage tailoring and finding second hand clothes. That’s not for everyone, but there’s something to be said for rummaging around and standing in front of a few mirrors with many many ideas in vintage shops, instead of going to the high st and wearing what you’re effectively told to wear.

I heard that the French wanted the Greeks in the Euro because they couldn’t imagine the country of Plato being excluded. Which made me laugh, particularly in the light of what’s happening now.

The Chap magazine asked me the same question and I said the well dressed airline pilot who executes a flawless emergency landing and then sidesteps the press conference. I think that actually happened not long ago- I think Gentlemanly behaviour, and Englishness, has a lot to do with accomplishment and skill coupled with humility and a simple sense of doing one’s duty. True gentlemen seek no praise for their achievements, which means that the current breed of Simon Cowell pleasers- who seek praise over and above any accomplishment, and for whom duty is simply the extra fiver on a bottle of Tanqueray, are the ultimate anti-gentlemen.