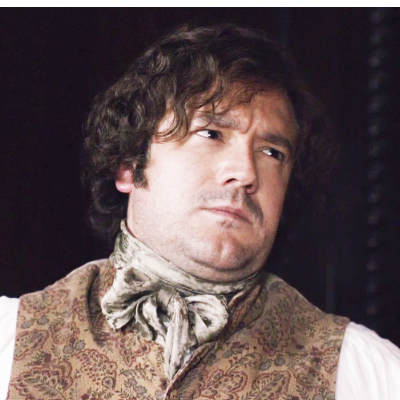 Having pursued him all around the globe I finally caught up with Rufus Jones and pumped him thoroughly – for information, I mean, of course. Actor, writer, lover of (and dresser-up-like) women the star of Hunderby, Holy Flying Circus and Bob Servant Independent tells all!

Henry: Rufus, thanks for taking the time to answer a few questions. You’ve just got back from holiday; are you a lounging on the beach kind of holidaymaker or more of a jumping-off-cliffs-wrestling-with-sharks kind?

Rufus: This year was much more Wrestling With Sunloungers than Wrestling With Sharks. Having said that, I did go snorkelling and saw quite a large fish, so it wasn’t without its Bondesque drama. I went to Mexico, which was completely beautiful. Ate like a king, drank like a fish and Salsaed like a prostitute.

Henry: You seem to have been working pretty solidly recently what can we see you in next?

Rufus: It’s been a busy year, yeah. Next up is a BBC4 series called Bob Servant, starring Brian Cox (the terrific actor, not the terrific physicist). Brian plays a charismatic buffoon who stands in a local Bi-Election. I’m the careerist Conservative candidate parachuted in to challenge him. That’s in January. I’ve also just filmed something for Sky Atlantic with my old mucker Dan Skinner which we also wrote. That should be January too.

Henry: You were terrific in Hunderby on Sky Atlantic. It seemed to be pretty well received but Julia Davis didn’t really leave it open for a second series – is that the last we will see of Dr Foggerty’s breeches?

Rufus: Thanks. It was a complete blast to film. Yeah, it’s a pretty complete story, but I think the channel seem keen for Julia to write a second series. But that’s really up to her. She’s a proper genius and I don’t think she’d want to do it again for the sake of it. I guess we’ll see. That said, I’m desperate to work with her again. If not on Hunderby, then something else. She’s incredibly inspiring.

Henry: How did you enjoy playing the romantic Darcy-esq hero? Should Colin Firth be worried?

Rufus: He should be incredibly worried, yes. I loved playing Foggerty. To be honest, there’s not a lot to dislike about playing romantic heroes. Horse riding , wearing a permanently sincere expression, it’s all incredibly fun. Plus Julia wrote some hugely funny lines for Foggerty. I like playing people who take themselves VERY seriously – it’s always seemed particularly funny to me, that level of self-absorption.

Henry: Last year you played Monty Python member Terry Jones in Holy Flying Circus. Was it difficult playing someone who is still alive? Did Jones call you up and give you any tips?

Rufus: Well, Holy Flying Circus was a sort of Gonzoish retelling of Python, intentionally playful with the truth, so there wasn’t a huge pressure to ‘get’ Terry Jones. That said, it was a daunting show to be a part of. I did a bit of research – watching lots of Python, really, which is just a pleasure – and went for it. I think it came out pretty well. And yes, Terry got in contact after the show and got me horrifically drunk in a pub. He’s completely charming and was very complimentary about the show. He utterly got it, which was quite a relief.

Henry: You also played Michael Palin’s wife Helen; was that your first time in a floral frock?

Rufus: First time since a university pantomime, where I played the Evil Queen, with David Mitchell the court jester. I like to think I rocked the floral print.

Henry: You are one fifth of the hugely successful comedy group The Dutch Elm Conservatoire. You have all gone on to pretty impressive things, do you think you’d ever re-form and work together again?

Rufus: It’s unlikely, to be honest. There were 5 of us and getting us all in a room is hard these days due to work. We’re all still good friends though. I’m working with Dan Skinner at the moment though – he’s found fame channelling Angelos on Shooting Stars and his own Channel 4 show. And Jim Field Smith is now a director in Hollywood. But you never know. I owe my career to Dutch Elm.

Henry: You’ve been working in television a great deal recently – do you miss having a live audience?

Rufus: I do. I still do the odd comedy gig in town – I am part of a double act called No Son Of Mine with Alex Kirk and we occasionally hose down the characters and do 20 minutes. Nothing beats a live audience. Having said that, I love the process of making TV. Some people find it irredeemably boring, but I like the technique and the discipline.

Henry: You’re no stranger to the red carpet and awards ceremony, do you like to get spruced up before greeting your public or are you more of a shabby-chic dresser?

Rufus: Yes, I love slinging on a whistle. Reiss suits tend to suit me, and when you don’t need to wear a suit for work, normally putting one on is always a bit of an event. Blue suit, brown shoes. That’s my current jam.

Henry: You were born in London, what do you miss most about the metropolis when you’re out of town?

Rufus: To be honest, not too much at the moment. I’m really enjoying getting out of London . I’ve spent my whole life here and I may be ready for a change. Having said that, there are things I think you’d immediately miss. The diversity, restaurants, culture. You forget how privileged Londoners are to have that all on their doorstep.

Henry: How would you spend a night out in town? Do you have a secret restaurant where the maitre d’ always keeps a table for you?

Rufus: Well, I love restaurants. Love them. Andrew Edmunds in Soho is always terrific, and I love Blacks Club on Dean Street. Outside of town, La Trompette in Chiswick is pretty hard to beat.

Henry: Are you very particular about your wardrobe or will you just chuck on whatever comes to hand?

Rufus: I love clothes too. I don’t buy hugely expensive items, but lots of little ones. That said, I just bought a winter coat from French Connection which made the eyes water a little. Got to keep warm though, don’t you? I think I’m not too bad in terms of style, but I do occasionally make outrageous howlers. Bought a jacket earlier this year which I looked at the next day and thought, what the hell was I thinking? I looked like a complete fraud. It lurks shamefully in the back of my wardrobe.

Henry: What do you look for when buying a shirt?

Rufus: I like fitted shirts, ones that slim me down a bit. Some shirts are a bit baggy and you sort of wear them like tents. Can’t stand them. I don’t own cufflinks so button cuffs are a necessity I guess. Those are my strong opinions on shirts. Your ones look terrific though.

After the interview I sat Rufus down and had a little heart to heart: he’s going to invest in some cufflinks…
Henry.