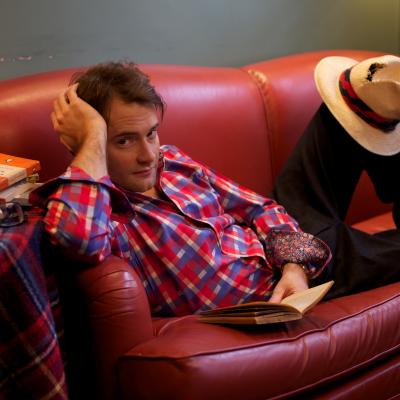 In between playing Gerald Forbes in West End hit ‘When we are married’ and rehearsals for Freddy Eynsford-Hill in George Bernard Shaw’s ‘Pygmalion’ we grab a club sandwich at the Groucho with young Brit actor Peter Sandys-Clarke.

From the video it looks like you had a lot of fun on the shoot for Henry Arlington, ever considered a career change?

I’m not sure I could stand the pace; it was pretty hard work. I really enjoyed it though and I suppose it’s a question of getting into the mindset: you’re there to make the shirts look good – that’s what’s really being photographed and what the ‘audience’ want to see. Not sure about a career change but I’d certainly consider doing more.

Do you regularly drink whiskey before 11am?

Only single malt… I try to avoid it although one or two late nights/early mornings here do feature rather foggily in my memory.

I think it’s always worth going for quality with a shirt. You can always tell a cheap shirt and I think that if you’re wearing good clothes then you inevitably feel better and hold yourself differently. That said I’m often quite broke so my shirts tend to be worn until they fall apart. Does that answer the question? Not really. Well, I’d usually go for something slightly fitted and with a double cuff.

Freddy treats everybody equally which I hope that I do and he’s pretty happy-go-lucky too. Oh, and he’s persecuted by his sister…

It’s so difficult to know really because so much depends on the company you have around you who you are working with. I’d love to do some Shakespeare of course, Hamlet and Prince Hal. I’d also love to do some Chekov one day and more Rattigan. Film-wise? It would have to be Harry Flashman.

It’s A Wonderful Life – so much more than just the frothy Christmas movie most people think it is.

Best restaurant for a date?

Andrew Edmunds in Soho or J. Sheekey’s: I’m not sure you can beat oysters and a bottle of Sancerre.

The cricket and the culture. I’m a country-boy at heart though.

Going on Holiday this year?

I’m fortunate enough to be in the position of being too busy to go on holiday so far this year and long may that continue.

I love being on stage and the whole process of rehearsals and the connection which you have with the audience. But then I haven’t done much yet in the film line so…

(DC) Cameron or Clegg (NC) in a boxing match?

DC. I think Clegg’s probably more nimble but Cameron’s going to be the heavier hitter. Tough one to call but perhaps if Clegg goes into the rope-a-dope then he might be in with a chance…

Really tough one. Jimmy Stewart, Michael Redgrave and Paul Newman would all be up there.

Wodehouse, Jerome, Milne, Barrie and Waugh. I think that would be a pretty entertaining evening.

If you won the lottery what would you spend it on?

Some tailored suits, a little house in the middle of nowhere, a beaten up old Land Rover and my own private cricket pitch. I’m presuming it was a Rollover week.

What do you always travel with?

Again, I don’t know how to choose. I have a habit of writing down any quote I like when I see it or hear it so how about these:

“It is just the little touches after the average man would quit that make the master’s fame.” Orson Swett Marden,

“To a man of spirit opportunities are duties” Anthony Hope

“We make our own light or darkness as we go.” William Bond; and finally

“It is always the best policy to speak the truth – unless, of course, you are an exceptionally good liar.” Jerome K. Jerome

You can see Peter as Freddy at the Garrick Theatre and incase your guessing his favorite shirt is the Florence in Jeans and Sunflower
http://www.garricktheatretickets.co.uk