The multi-talented Ben Wilson took time out to chat about comedy, girdles, battleships and Kelly Brook… 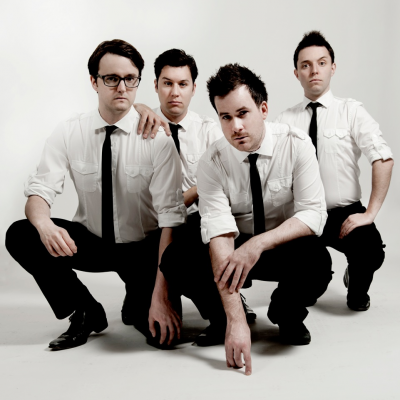 Henry: What are you up to at the moment?

Ben: I’m sitting here answering these questions… derr! But before that I was eating whitebait in a lovely Melbourne Italian Restaurant. Whitebait is weird. It’s like eating the whole fish. No messing about. Whole fish, mouth, chew and done. I wonder what else I can eat whole?

H: You performed at the Gala for the Melbourne Comedy Festival, how was it performing in front of 2,500 Australians?

B: Super fun. I think the fact they were Australians is less relevant than the actual amount of them. We do most of our gigs in front of between 60 – 300 people and small rooms respond quicker. To using a boating analogy (WHY NOT YEAH!?) small rooms are like speed boats. They respond quicker and you can play with them more. Large rooms of over 1000 are like super tankers. You have to slow down and let them come to you. But when you get them there is nothing like 2500 people laughing at dick jokes. It’s awesome.

H: Rumour has it you are branching out into film and TV, what are your plans for the future?

B: Our ‘plans’ versus ‘what is actually happening’ are two very different things. But yes we do want to head into TV. Doing a TV sketch show has long been one of my greatest ambitions and I’ll be damned if I’m going to let a little thing like ‘nobody commissioning us’ stand in my way. We currently attacking YouTube. To use a boating analogy… we are attacking HMS YouTube… with boats.

B: It would be hugely indiscreet of me to say… but definitely Kelly Brook. Not really! Both are lovely and very good at what they do. Being a mild mannered middle-class man (bit of alliteration there) it can be hugely embarrassing telling a girl to be sexy. Both can give the camera that with their eyes closed.

H: Do you think the Australians have a different sense of humour to the Brits?

B: I think we are closely related culturally. We grew up on a diet of a lot of the same TV shows. Everybody here knows Fawlty Towers and Blackadder. They even still show Coronation Street. However, it seems to be changing. Like the UK a lot of TV is American now. Not all bad… but for every 30 Rock or Arrested Development there are 20 Real House-Wives of Disney Land. Unfortunately, all our references are becoming more American which is a shame as we have so much home grown talent (go towww.idiotsofants.com for more details).

H: You seem to have some very devoted fans, any indecent proposals? Or proposals, for that matter?

B: It’s weird calling them fans because if anyone comes to a gig more than once you get to know them and they are lovely. No indecent proposals yet but we are open to all offers.

H: You did a degree in History how did you go from that to writing and performing?

B: My university career was always a back up really. I always wanted to do performing and that’s what I spent most of my time at Uni doing… performing and avoiding going to history lectures. I hope all this comedy stuff works out though as if it doesn’t I’ll have to go and live in the past.

H: You’re a keen and gifted cricketer and play for the Thunderers, batsman or bowler?

B: I play cricket a lot like Michael Schumacher… IE Not very well and with a strong German accent. I could not claim to be either bowler or batsman but if they were giving out awards for ‘unfocused enthusiasm’ then I’d win. Or “VIN!” as I’d say.

H: Nick Park keeps his Oscar in the cupboard, where do you keep your awards?

B: My mum has one of our Chortle Awards and the Edinburgh Comedy Award Nomination trophy (is it still an a award if we were only nominated?) the other sits proudly on my mantelpiece at home. Being in a sketch group we have to get 4 awards made every time we win anything… I imagine that’s why we haven’t won lots of stuff.

H: Your wife, Jessica Ransom, is shortly going to be appearing in ‘Posh’ in the West End, do you have any aspirations to go into conventional theatre?

B: Certainly. I love theatre but I love musical theatre more! I think my particular brand of ‘gurn based acting’ would be more appropriate with a song and dance number behind it. And man can I sing. That was actually a question… can I sing?

H: What do you look for in a shirt?

B: I look for a strong crisp pattern and a nice fitted cut. Although thanks to the Australian beer I might need a small pouch for my belly. Or a girdle! Come on Arlington… shirts with fitted girdles! It’s the future I say!

Ben and The Idiots are currently touring in Australia and New Zealand and will be back in the UK in mid-May to hit the road again: www.idiotsofants.com, www.yorkshirecoastcomedy.co.uk